Fight Back News Service is circulating the following statement from the Popular Front for the Liberation of Palestine (PFLP) on the Bush administration’s attack on Syria. 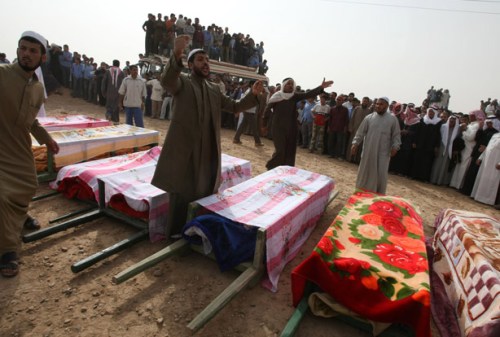 A spokesperson for the Popular Front for the Liberation of Palestine, speaking on October 27, 2008, condemned the United States’ military attack against Syria, noting that this untrammeled U.S. military aggression was a threat to all of the people in the region and was meant to undermine sovereignty and self-determination in the region.

The attack on an area in Syria close to the border with Iraq killed eight members of a family at their farm. Others reported seeing two individuals abducted by the attacking U.S. forces. The PFLP spokesperson harshly condemned this U.S. attack, noting that it was meant to put further pressure on Syria to cooperate with the U.S. agenda for the so-called “war on terror” as well as establishing that no nation has any sovereignty in the face of U.S. imperialism.

The PFLP statement noted that this attack comes as an attack on all in the region and is a direct assault on Syrian sovereignty, noting that it also intends to strengthen the hand of the U.S. strategic partner in the region, the colonial settler occupier state of Israel. The statement expressed the support of the PFLP for the Syrian people and all people facing down U.S. aggression, and noted that it is the right of Syria to defend itself against such invasions and attacks. Noting that the U.S. forces attempted to justify this attack by alleging that the area in Syria is a base of operations against the U.S. occupation in Iraq and that the Syrian-Iraqi border is a way in which many fighters enter Iraq to combat occupation, the PFLP noted that the Syrian and Iraqi border is a matter for Syrians and Iraqis and that the U.S. occupation of Iraq is entirely illegitimate and has no authority over the borders of Syria or Iraq.

Comrade Jamil Majdalawi, member of the Political Bureau of the PFLP noted that “this is a natural extension of the American aggression against the Iraqi people to reach the rest of the people of the region. This takes different forms – sometimes establishing military bases to control the area, and sometimes a brazen attack, such as this blatant American aggression on Syria, which killed a group of innocent civilians.” He stressed that a clear Arab stance is necessary and for full Arab support of Syria in the face of this aggression, noting that the allowance of U.S. military bases in Arab countries is a continuing threat to the entire region and a further undermining of sovereignty and self-determination in the region. He called for an explicit Arab condemnation and rejection of U.S. aggression, with political and economic action against such aggression.