The following is from the Philippine Revolution Web Central: 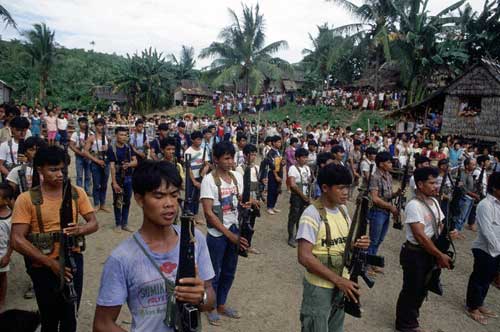 The people welcome the CPP’s coming 40th anniversary, the fascists and reactionaries are piqued

The National Democratic Front-Eastern Visayas said today that the people welcome the coming 40th anniversary of the Communist Party of the Philippines because revolution is the only hope and way out of the crisis in the country and the world. “The crisis in the Philippines is linked to and worsened by the global capitalist crisis,” said Fr. Santiago Salas, NDF-EV spokesperson. “If the US and other global centers of capitalism are staggered by financial crisis and certain depression, how much more their semicolonies like the Philippines relying on foreign debt, dependent on imports, and geared to raw material exports? The local and international crises mean more exploitation, poverty, underdevelopment and repression of the Filipino people. Thus, because of the revolutionary optimism offered by the 40th anniversary of the Communist Party of the Philippines on Dec. 26, the fascists and reactionaries are in a frenzy of vilifying the CPP.”

Fr. Salas laughed off statements by the Eastern Visayas police and military – already on red alert – alleging widespread attacks by the New People’s Army because of the CPP anniversary. “The police and military twist the NPA’s intensifying guerrila offensives to stereotype the CPP anniversary as an occasion for fanaticism and blind attacks. The real fanaticism is such anticommunist and anti-people hatred by the fascists and reactionaries. Moreover, the fascists and reactionaries are more piqued than ever because the CPP and the revolutionary movement it leads grow stronger year by year. The CPP’s 40th anniversary best debunks Gloria Arroyo’s boasting the CPP and the revolutionary movement it leads will be over by 2010. That’s way overdue since in fact, the enemy has been declaring such a debacle since the 1970s in Eastern Visayas.”

According to the NDF-EV spokesperson, the Arroyo regime is involved in other dirty tactics and underhanded maneuvers to spoil the CPP anniversary and step up a legal offensive as the counterpart of its internal security plan Oplan Bantay Laya 2. “The issue of alleged “mass graves” in Inopacan and Hilongos towns in Leyte is a high-profile project involving the military and the civilian government, to vilify the CPP and persecute prominent revolutionary figures as well as progressives in legal organizations framed as communist fronts. But the CPP has long humbly acknowledged the error of the Anti-VD Campaign, self-criticizing and asking forgiveness from the families of the victims and the masses. In fact, the revolutionary movement has long returned to the areas where the Anti-VD Campaign happened, and had been accepted back by the masses. But the Arroyo regime and the military keeps on using the issue for black propaganda and malicious attacks both on the revolutionary and the legal democratic movements.”

Fr. Salas added that the other staple of black propaganda by the Arroyo regime and its military in denigrating the CPP is hiring professional witch hunters and those who abandoned the revolutionary movement. “There are such as Jun Alcover, who makes a living from attacking the CPP and was in the region recently to promote his anticommunist book and the laughable lie that the revolutionary movement extorts billions from the masses. The only ones who could believe Alcover are ignoramuses and rabid fascists and anticommunists. They choose to believe the lie rather than open their eyes to the reality that it is the Arroyo regime that bleeds the masses of billions in bureaucratic corruption ranging the entire ABC to ZTE.”

The NDF-EV spokesperson said in conclusion that the CPP anniversary on December 26 is a significant political event and also fittingly pays tribute to the communist martyrs who through the decades have been the most resolute revolutionary fighters. “In the countryside and the cities, the NPA and all the revolutionary forces will join in celebration to honor the leading role of the CPP. There is usually a program with speeches for the occasion, remembrances of revolutionary martyrs, cultural performances and merrymaking with the masses. There is nothing like that whipped up by the fascists and reactionaries, who vilify the CPP but end up caricaturing themselves – vicious, fanatical, anti-people and behind the times.”