The following article sheds some important light on events in Pakistan, and is from MR Zine: 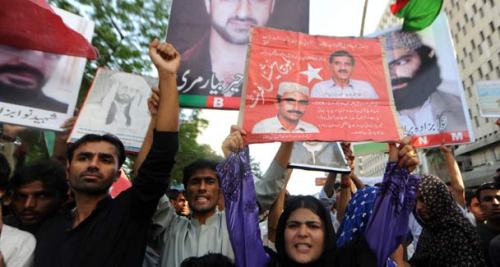 The Baloch Question
by Umer A. Chaudhry

The brutal murder of three nationalist leaders of Balochistan and the ensuing crisis has brought the issue of the Baloch national struggle to the forefront once again, only to be met with feigned surprises and arrogant dismissals by a major part of the rest of Pakistan. We in Pakistan — and particularly those of us in Punjab — love to externalize the roots of problems that irritate our sensibility. Therefore, fingers were immediately pointed at foreign involvements, scarcely any thought given to our own attitude towards one of the largest provinces of our country. The deliberate lack of introspection combined with the respect that wild conspiracy theories continue to enjoy renders it very much necessary to take a dip into the history of Balochistan, for that is where the roots of the question lie.

The roots of Baloch nationalism can be roughly traced back to the middle of the nineteenth century when the region became a victim of foreign aggression from both eastern and western sides during the decline of the Khanate of Kalat. For the expansionist British colonizers, Balochistan was a strategically important region to manage the buffer state of Afghanistan against Russia and maintain communication links with Central Asia and Persia. Starting from 1839, after the assassination of Mir Mehrab Khan in a British regiment’s attack on Kalat leading to the installation of an unpopular Khan, the British made several inroads in the Kalat State. British power was consolidated in Balochistan through a number of treaties, culminating in the treaty of 1876 through which the sovereignty of the Khan of Kalat over the region was brought under the administrative control of the British.

In the same period, the Baloch region suffered intrusion from Iran on the western side under the leadership of Qajar King Nasir-al Din Shah, with a major war fought in Kerman in 1849. With Iranian expansionism in Balochistan on the rise, the British decided to adopt the policy of appeasement towards the Iranians to dissuade them from the Russian influence. In 1871, the British agreed to the Iranian proposal for the division of Balochistan and appointed a Perso-Baloch Boundary Commission with Maj. General Goldsmith as its Chief Commissioner. The ‘Goldsmith Line’ thus arbitrarily divided the cultural, social, and economic unity of Baloch people while excluding the concerns of the people and government of Balochistan. The sovereignty of the Khanate of Kalat, which was not a part of British India, was seriously compromised, leaving behind a deep sense of injustice, discrimination, and alienation among the Baloch people. Later in 1893, the areas of Outer Seistan and Registan were handed over to Afghanistan by the’Durand Line’, further aggravating the Baloch anger.

The Baloch people have never been passive in accepting the foreign domination, interference, and arbitrary partitions. The end of the nineteenth century and the first half of the twentieth century saw the rise of resistance through a number of violent revolts and rebellions as well as peaceful protests against the injustice meted out to the Baloch people by the British colonizer and the Iranian kingdom. The concerns of the Baloch were not given any due consideration and, as was typical of the colonial rule, the Baloch resistance was suppressed with a heavy hand.

The next major incident that catalyzed the Baloch national struggle was the forced annexation of British Balochistan and the Khanate of Kalat to Pakistan after the independence and partition of India. The Baloch concerns arose when the referendum in British Balochistan, which was leased to the British by the Kalat State through a treaty, was carried out despite the objections raised by the Khan of Kalat. Once again, the Baloch saw foreign powers interfering in their affairs without their permission. Later, the newly born State of Pakistan forcibly annexed the Kalat State through an armed attack on 26 March 1948, even though the Khan of Kalat had announced independence on 12 August 1947, which was his right under the British withdrawal plan for India agreed upon by all major parties. The Khan agreed to merge the Kalat State with Pakistan on 27 March 1948, and the Pakistan Army marched into the capital of Kalat on 1 April 1948 as sign of their ‘victory’.

The forcible annexation of Balochistan intensified the Baloch grievances. For the Baloch, the coerced annexation to Pakistan was another attempt to curb their right of self-determination and to decide the destiny of their nation. The aggression was not accepted with silence and Prince Abdul Karim Khan, brother of the Khan of Kalat, initiated a revolt against the Pakistan Army. This revolt was brutally crushed within a short span of time and Prince Abdul Karim Khan was arrested and imprisoned.

The second Baloch rebellion in Pakistan started in 1958 in the aftermath of the ‘One Unit’ policy that was advocated vigorously by the politically dominant bureaucratic establishment of Pakistan in 1955. Following this policy, several Baloch states were forcibly dissolved and annexed into Pakistan, leading to popular resistance. In 1958, Khan Ahmed Yar Khan, the Khan of Kalat, organized a rebellion calling for secession from Pakistan. The Khan was arrested on the charges of sedition, his palace was taken over by the army, and marital law was imposed. This led to a long resistance, lasting four years, by the Baloch people against the aggression of the center. Around the same time, another rebellion was organized by Nawab Nawroz Khan, popularly known as Babu Nawroz, fighting the forces led by Lt. Col. Tikka Khanwho became notorious as the ‘Butcher of Balochistan’ and later as the ‘Butcher of Bengal’. Nawab Nawroz Khan, who was in his 80s at that time, was lured into surrender by a false oath on Quran for amnesty. The oath was not honored. Nawab Nawroz was arrested with his followers. His sons and other leaders of his movement were executed. The life of Babu Nawroz was, however, spared because of his old age and he died in custody. Khan Ahmed Yar Khan was granted amnesty and freed.

The year 1973 saw another eruption of nationalist anger in Balochistan when the central government, led by Zulfiqar Ali Bhutto, refused to accede to the Baloch demand for provincial autonomy. Encouraged and aided by the Shah of Iran who was weary of the possible spillage of Baloch nationalist upsurge in Iranian Balochistan, the demand for provincial autonomy was nipped in the bud in Pakistan by the planted conspiracy of the ‘London Plan’: arms and ammunition allegedly en route to Kalat were discovered at the Iraqi embassy. The Baloch political leaders were arrested on the pretext that they hatched a conspiracy against Pakistan and were arbitrarily removed from ministerial positions. The National Awami Party (NAP) was banned though a Supreme Court order and their leaders were arrested, includingAtaullah Mengal, the then elected Chief Minster of Balochistan, along with Khair Baksh Marri and Ghaus Bax Bazenjo. They were all charged with high treason, persecuted at the specially constituted Hyderabad Tribunal.

The Baloch resistance of the 1970s arose under the leadership of the left-oriented Baloch People’s Liberation Front (BPLF), which was joined by people from all across Pakistan giving the movement a very progressive color. The Pakistani government, using the military aid provided by the Shah of Iran, conducted a merciless and savage operation killing thousands of Baloch civilians and displacing hundreds of thousands. The 1973-1977 civil war became one of the most widespread and bloody civil unrests against the federal government in Pakistan after the secessionist war of liberation in Bangladesh. The Baloch movement was quelled with the coup of General Zia-ul-Haq, and nearly all the insurgents were granted amnesty. Many Baloch outfits maintained their operations in Balochistan and amongst the Baloch refugees in Afghanistan.

The next and the fourth insurgency in Balochistan started in 2005, around the same demands of provincial autonomy and control over the province’s natural resources. Instead of giving due consideration to the recurrent demands of the Baloch people, the federal government under the military dictatorship resorted to the same old colonial tactics of high-handedness and initiated a full-fledged civil war in Balochistan. The assassination of Nawab Akbar Bugti became yet another turning point in the Baloch resistance and the estrangement of Baloch population. The arrogant, nay evil, response of General Pervez Musharraf in congratulating the military commanders and intelligence services for successfully carrying out the murder of Nawab Akbar Bugti added extra fuel to the fire. The brutality as well as circumstances of the recent killing of the three Baloch nationalist leaders of Balochistan — Ghulam Mohammad Baloch, Lala Muneer Baloch, and Sher Mohammad Baloch — have further aggravated the Baloch rage towards the federal government and now increasingly, but understandably, towards the rest of the population of Pakistan who have been silent bystanders.

The objective of briefly narrating the history of the Baloch crisis is only to highlight the real causes of the current conflict in the province. The lack of respect for self-determination of the Baloch people, the denial of provincial autonomy, the highly oppressive and arbitrary manner in which their leaders have been treated, the savagely cruel conduct of the federal government in times of crisis, the refusal to let the Baloch exercise their rights over the natural resources of their province, the outright discrimination against the Baloch people in the matter of economic and social rights — these are among the important factors that have brought the conditions to what they are today. Rather than externalizing the problem, we must see it in its proper historical context. The federal government of Pakistan has to do more than make half-hearted attempts to restore confidence of the people of the province. Nothing short of provision of maximum provincial autonomy, respecting the right to self-determination of the people of Balochistan, can begin to alleviate their pains and angers.

Umer A. Chaudhry is a lawyer based in Lahore, Pakistan and a member of the Communist Workers and Peasants Party (CMKP) of Pakistan.