Against Trotskyism: A Reading Guide 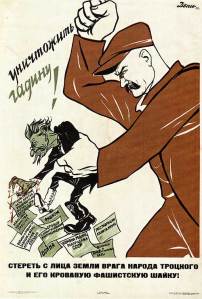 “The entire edifice of Leninism at the present time is built on lies and falsification and bears within itself the poisonous elements of its own decay” – Leon Trotsky, letter to Chkheidze, 1913.

The question of Trotsky is not merely a historical question. Firstly and most importantly it is a question of political line. There are significant political reasons that Trotskyism has failed to ever lead a successful revolution. It is a fact that Trotsky, on the one hand, and Lenin and Stalin on the other, put forward two very different and opposing lines on almost every major question for the international communist movement. Rejected by the Communist Party of the Soviet Union and by the Soviet people as well, Trotsky then turned bitterly to the organization of counter-revolution, both within the Soviet Union and internationally.

To help clearify these important points for the international communist movement, The Marxist-Leninist has put together this reading guide. It has been incorporated into the Marxist-Leninist Study Guide as well. The main texts here are (1) M.J. Olgin’s outstanding study of Trotskyism which deals well with the political differences between Bolshevism and Trotskyism, (2) an article by Nadezhda Krupskaya (the wife of Lenin) on Trotsky’s distortions of the history of the October Revolution, and (3) an eyewitness account by Harry Haywood, the great African American Communist leader, of Trotsky’s ideological defeat by Stalin. Many supplementary texts are provided as well. For more on the contributions of Stalin to the ICM, see Long Live the Universal Contributions of Comrade Joseph Stalin.

“It is the duty of the Party to bury Trotskyism as an ideological trend.” – Joseph Stalin

21 responses to “Against Trotskyism: A Reading Guide”