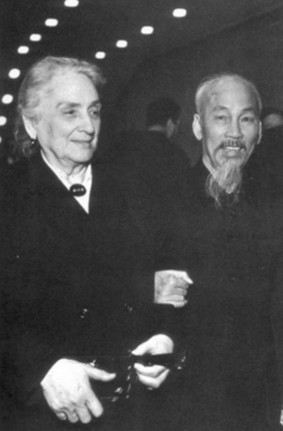 In honor of Women’s History Month and International Women’s Day (March 8th), The Marxist-Leninist is posting a number of articles on women’s liberation. The following article is by Dolores Ibárruri (La Pasionaria), a member of the Communist Party of Spain and a Republican leader during the Spanish Civil War. Her autobiography, They Shall Not Pass, is essential reading.

Women at the Front

She was a volunteer, a member of the civilian militia, wearing the blue blouse of a workman. She clasped her rifle with ardour, as though it were not a weapon of death but a much-desired plaything. Amidst the groups of merry militia men who were going smilingly to fight and perhaps to die, she marched in silence, serious and self- engrossed. A light burned in her eyes. They expressed hatred, inflexible determination and courage. I approached her and asked:

“Where are you from?”

“Why are you at the front?”

She was silent for a few moments, and then answered:

“To fight fascism, to crush the enemies of the working people and…to avenge the death of my brother.”

“Yes, he was a soldier and a communist. When the rebellion broke out they wanted to make him, like many other soldiers, fight our brothers and go against the Republic. He refused and they shot him like a dog. I have come here to join the ranks, to take the place he would have occupied, and to avenge his death, to show the fascist scoundrels that when men die, women take their place. We are fight- ing with the same enthusiasm and courage as the men. We have learned from them how to die. It is better to die than to live in the fascist hell in which the workers of other countries are suffering, isn’t that so, comrade?”

I questioned her comrades, curious to know how she behaved in battle. They spoke of her with admiration. She was the first wherever the danger was greatest, risking her life with astonishing calmness.

She, like the other girls and women who are challenging death, and many of whom are meeting death, is reviving the tradition of the heroines who throughout our history have fought for independence and a constitution—the heroines of Sagunto and Nuinantia, La Vaillida, Augustina of Aragon, Maria Pita, Manuela Sanchez, Mariana Pineda. Women have always played a prominent part, supporting the men in the struggle for liberty and showing them by their example that it is better to die than to bow to the butchers and oppressors of the people,

The heights of Guadarrama, Madrid and many other cities have witnessed the heroism of women who are battling a strong and brutal enemy. They march to death merrily singing. They cheer those who have lost heart, infuse courage into them. and inspire them with the fighting spirit. So it was at Alto de Leon, in Somosierra and elsewhere. These places, drenched in the blood of many a nameless hero, will shine with an inextinguishable flame in the history of our country’s struggle against reaction.

With them will be bound up the revolutionary traditions of our people, with them, the women who are fighting at the front, who are donating their blood to save the wounded, who, forgetting their own fatigue, watch at the bedside of wounded heroes, who died exclaiming: “Long live liberty!”

We dip our colours in honour of you, dear women comrades, who march into battle together with the men.

All honour to you, women anti-fascists!