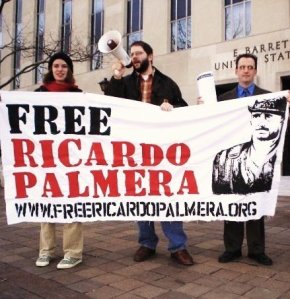 “We were surprised to see facebook silence this group, which exists to fight for justice for Ricardo Palmera,” Angela Denio responded, “Professor Palmera is a good man whose story deserves to be heard by many people.”

Responding to this attack, a protest group was quickly created on facebook to demand the accounts be reinstated. People from around the country called and wrote to facebook to oppose the censorship of the Free Ricardo Palmera group. In just a matter of days the protest group’s membership swelled to more than 500 members. Articles and a video about facebook’s censorship were written and circulated all over the internet on more than 20 websites. Finally, on July 12, the accounts of Josh Sykes and Angela Denio were reactivated.

Facebook sent a message to Sykes, stating that his account was reinstated, but that, “After reviewing your situation, we have determined that your group violated our Statement of Rights and Responsibilities. One of facebook’s main priorities is the comfort and safety of our users. We do not allow credible threats to harm others, support for violent organizations, or exceedingly graphic content. Your violation of facebook’s standards has resulted in the permanent loss of your group. We will not be able to reactivate this group for any reason. This decision is final.”

As the first of the three administrators back on facebook, Sykes sent a message to the members of the protest group. “I’m writing to you all to thank you for your support, to tell you some good news, and to say that we are not finished yet,” the letter read.

The letter went on, “My profile has been reinstated by facebook. We are still waiting to hear about the other two administrators, Angela Denio and Tom Burke. However, facebook is not yet willing to budge on the Free Ricardo Palmera group.”

Responding to facebook’s message, Sykes wrote, “The Free Ricardo Palmera group, of course, never sought to ‘incite violence.’ On the contrary, the National Committee to Free Ricardo Palmera stands for an end to the U.S. war in Colombia and seeks justice and human rights. We demand the release of a political prisoner, a peace negotiator with Revolutionary Armed Forces of Colombia – People’s Army (FARC-EP), Ricardo Palmera, a freedom fighter who is being held in Colorado’s Supermax prison in a gross violation of Colombian sovereignty.”

Sykes explained how Palmera had devoted his life to peace and social justice. “Ricardo Palmera has fought all his life for peace, first as an organizer for the Patriotic Union (UP), a peaceful, leftist electoral coalition. But when the UP made some gains, the Colombian military and their death squads assassinated 4000 of their activists and elected officials in cold blood, leaving Palmera with no choice but to go to the mountains and join the guerrilla. It was in his capacity as a peace negotiator, meeting with a UN official in Ecuador, that he was arrested and extradited to the United States.”

Tom Burke, spokesperson for the National Committee to Free Ricardo Palmera, said, “Facebook suspended my account because we support Colombian revolutionary Ricardo Palmera. Facebook wants to shut us up in the same way that pro-government death squads trained at the School of the Americas in Fort Benning, Georgia murder Colombian trade unionists, peasant organizers and leftist students. The want to shut them up. I’m still waiting for facebook to recognize the mistake they made in censoring the Free Ricardo Palmera group. I am not going to be silent while a brave Colombian revolutionary is forced to live in a tiny concrete cell for 24 hours a day with no human contact. The U.S. empire is in decline and facebook censorship is just one sign of the desperation of the ‘powers that be.’ They are on the losing side of history.”

The National Committee to Free Ricardo Palmera is calling for a redoubling of efforts to get justice. They are asking that people continue to call Mark Zuckerberg at (650) 543-4800 and demand the reinstatement of the account of Tom Burke and continue to demand that facebook reverse its censorship of the Free Ricardo Palmera group. The NCFRP is also calling for supporters to email facebook at info@facebook.com

Angela Denio added, “Facebook has lifted a rock only to drop it on their feet. By attempting to silence us, they have given us an excellent opportunity to raise awareness around the struggle to free Ricardo Palmera. As long as they stubbornly continue to censor us we will continue to build momentum around Professor Palmera’s just struggle for freedom.”