What about Slavoj Žižek?

“The dialectics of history were such that the theoretical victory of Marxism compelled its enemies to disguise themselves as Marxists.” – V. I. Lenin, The Historical Destiny of the Doctrine of Karl Marx

“Pre-Marxian socialism has been defeated. It is continuing the struggle, no longer on its own independent ground, but on the general ground of Marxism, as revisionism.” – V. I. Lenin, Marxism and Revisionism

Someone asked me today what I think of Slavoj Žižek, the well known celebrity of “leftist” philosophy. I’ve always had a hard time reading his rambling, jargon-filled books. I have to admit, having tried to read a couple of his books back when I was a philosophy student (my focus was on Hegel, Althusser and Badiou) I found Žižek mostly incomprehensable. Most recently I read his book First As Tragedy, Then As Farce. I was disappointed that he basically follows the “islamo-fascism” line on Arab resistance movements like Hezbollah, the capitalist restoration line on People’s China, and basically gets his facts wrong on any number of other points. He believes the socialist project in the twentieth century was mainly a giant failure. I see no real value in his writings. 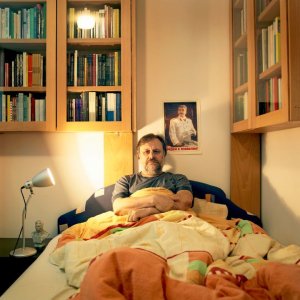 Slavoj Žižek likes to pose as some kind of "stalinist."

That said, I’d like to share an article here on Žižek, from the blog Never Forget Class Struggle for consideration:

I don’t pretend to understand Dr. Žižek’s “Lacanian” “post-Maoist” philosophy or critiques of popular culture or whatever it is that he does. All I know is that he pretends he’s some kind of adherent to some form of Marxism Leninism and “Maoism” and people seem to have an impression of him as a genuinely progressive academic. When it counted, however, Žižek was an unabashed leader of counterrevolution in his homeland of Slovenia. Žižek in fact fought to destroy the system he claims he now supports, or at the very least that people he now admires (Lenin, Mao) fought so hard to build. Žižek during the era of socialism was one of the prominent members of the “dissident” circles advocating for its destruction. In the late 1980s he joined the secessionist anti-socialist movement developing in Slovenia, and become an active member of the Liberal Democratic Party (who came to power once Slovenia seceded from the Socialist Federal Republic of Yugoslavia). He was not just a passive participant in this movement, since he was the candidate for the position of President of Slovenia for the LDP in 1990.

People like to taunt socialists about the supposed “misnomers” characterizing a lot of the formal names of the regimes of socialist countries (for instance, there is always a chortle about the name ‘Democratic People’s Republic of Korea’). However, the name “Liberal Democratic Party” of Slovenia is a joke. For one, these cold blooded killers murdered members of the multi-ethnic JNA (Jugoslovenska Narodna Armija – Yugoslav National Army) in cold blood, simply for being stationed in their own country. There is video footage of Slovenian nationalists gunning down JNA soldiers waving white flags. The “liberal democrats” then proceded to steal the bank accounts of non-Slovenes who had bank deposits in the banks of Ljubljana. Ljubljana (the capital of Slovenia), was the banking center of Yugoslavia. The Ljubljana banks avoided paying back money to their non-Slovene depositers by simply changing the name of the bank, and saying the new bank should not be held responsible for the previous accounts. The LDP quickly went to work dismantling the socially owned economy in their new ‘republic’, undoing what had been built for generations. This included workers’ self-management, directing authority back into the hands of the capitalists.

This is the movement with which Dr. Žižek became an integral part, and even led. Of course, Žižek had also been a member of the Communist Party of Slovenia at times. He seems to have done whatever it took to ensure that he himself would be of influence and power. He claims he left the Party because of the trial of four people by the JNA in the late 1980s. The Slovene Communists had nothing to do with that trial and in fact implemented the “punishment” in the mildest manner possible. The fact is Žižek was writing anti-Communist diatribes for decades.

Since socialism has been dismantled in many parts of the world, parroting the line of his new masters is no longer new or novel. He must do something different in order to get attention. So he tries to meld his Lacanian gibberish with some kind of revolutionary politics. The question is: where was Slavoj Žižek when it counted? He was on the side of counterrevolution. An old wine in a new bottle is a still an old wine.

65 responses to “What about Slavoj Žižek?”