The following statement is from the Colombia Action Network:

NO to U.S. bases in Colombia!

Peace Not War
We oppose U.S. intervention and war in Colombia.  We oppose the seven new U.S. bases being built to wage war on the Colombian people and threaten their neighbors.  We say “NO to U.S. bases in Colombia!”  We want peace and friendship with our neighbors, not war. 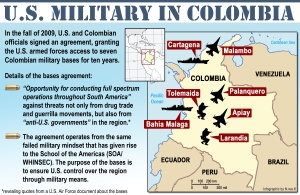 U.S. Dirty War—7 U.S. Bases
The U.S. is waging a dirty war in Colombia. Plan Colombia brings poverty, misery, and death to the Colombia people.  It is a counter-insurgency war aimed at the poor peasants and workers.  Plan Colombia is a war plan to fight the Revolutionary Armed Forces of Colombia (FARC), a growing and expanding rebel insurgency that defends the movements of workers and peasants.

The new U.S. bases agreement calls for 800 U.S. military advisers and 600 corporate military contractors, but there is no limit.  The U.S. bases are a reaction by the White House to the failure of Plan Colombia.  Despite what you might read in the U.S. press, the Colombian elite and their politicians are less popular and growing more isolated from the Colombian people.  They are losing control of the situation.  The rebellion is spreading and growing stronger.  The U.S. bases are an act of desperation to counteract the growing movement for independence in Colombia and Latin America.

Close the SOA and Cut Off the Colombian Military
As part of the campaign to say “NO to U.S. bases in Colombia!” we are calling for mobilization to shut down the School of the Americas (SOA) at Fort Benning, Georgia, November 19-21st, 2010.  It is at the SOA, where the U.S. trains the Colombian military officers who direct the death squads and abuse human rights.