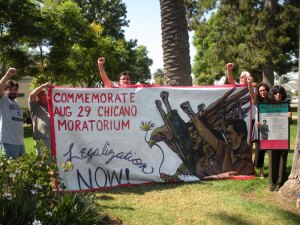 The committee denounced the ongoing war in Afghanistan-Iraq and the U.S. military recruiting targeting Latino youth, especially immigrants. Veteran Chicano activist Carlos Montes urged participation in the event, which is demanding full equality and self-determination for the Chicano nation.

Yvonne De Los Santos stated, “Today Chicano youth continue to be recruited by false promises of legalization and education only to be sent to fight U.S. wars for domination for profit. We denounce the current U.S. wars in Iraq and Afghanistan and call for all troops to be withdrawn. We learned from the Vietnam War that wars only serve to kill and maim our youth and make profits for the war industry like Halliburton and others.”

The committees also demanded that District Attorney Steve Cooley open an investigation into the killing of Ruben Salazar by the LA County sheriffs at the original Chicano Moratorium on August 29, 1970.

On August 29, 1970 over 30,000 Chicanos marched to protest the Vietnam War, the high casualty rate of Mexican-Americans in the Vietnam War and racism at home. The Los Angeles Police Department and LA sheriffs attacked the peaceful rally, beating and arresting dozens and killing Ruben Salazar, a Los Angeles Times writer and news director for KMEX.

Delegations will be converging on East Los Angeles from as far away as San Francisco and El Paso, Texas.