A Reply to Greek CP on 21st Century Socialism

The Marxist-Leninist recieved the following article from Stansfield Smith, a member of the Chicago Committee to Free the Cuban 5 and Latin American Solidarity Coalition Coordinating Committee, in response to the KKE article on 21st Century Socialism. While in princple I agree with many of the points in the Greek Party’s article, Smith makes significant points about the role of the united front in the national liberation movements. Hopefully this will generate further discussion of these important questions: 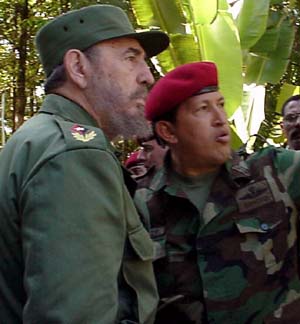 Reply to Greek CP about the “Opportunism” of 21st Century Socialism

A new world is possible and that new world is being built in Latin America. The Bolivarian process in Venezuela is an inspiration for millions of people around that world, and has stimulated renewed interest in socialism. Dimitris Karagiannis writes an article that reads like a sectarian condemnation of the direction of this whole revolutionary movement taking place in Latin America – except that in Cuba. (But it is impossible to imagine a Cuban periodical printing what Karagiannis wrote.)

He criticizes Latin American countries for condemning imperialism and identifying imperialism with the U.S., and for calling US imperialism an “empire.” He does not explain what other imperialism there is that is ravaging Latin America, nor does he explain why he thinks the U.S. is not running an empire. Though he shies away from stating this, his is a criticism of the Cuban Communist Party and Fidel Castro who have always focused, correctly, their attacks on U.S. imperialism and the U.S. empire, and of organizing all world forces against it.

This identifying imperialism with the U.S., Karagiannis pretentiously states, shows a “lack of class analysis.” Why? It supposedly submerges the need for a class confrontation with the owners of capital in each country.

I should note that the traditional Communist Parties have always called for national liberation struggles through an alliance of the workers, peasants, petty bourgeoisie with the patriotic national bourgeoisie in these countries against imperialism and their local puppets in the native bourgeoisie class. Other parties have called for the workers to lead the peasants against all the owners of capital, the whole native bourgeois class and imperialism. These latter parties are the Trotskyist ones.

Karagiannis states, “due to the erroneous analysis of the contemporary world and the prevalence of opportunist influences, the bourgeois class is wrongly differentiated as a national one and one subjected to foreign influence.” Thus, he takes the traditional Trotskyist position in this debate.

In contrast to what Karagiannis seems to think, none of the socialist revolutions that took place in the 20th century intended to overthrow capitalism rapidly. Each envisioned a long slow process taking place, but was forced by imperialist attempts to destroy the revolution to go faster than it wanted. The Bolsheviks eliminated capitalism only due to the demands of the civil war of 1918-20. By the end of the civil war, industry in Russia basically did not exist, and as a whole was about 10% of the level it was before 1914. To revive industry, Lenin called for the introduction of state capitalism, where the working class party would rule over the development of a controlled capitalist economy.

Cuba’s socialist revolution developed, not because they sought to institute socialism and eliminate capitalism. It began with the distribution of lands to the peasants, lands mostly owned by U.S. corporations. The actually existing U.S. empire would not sanction the example this would set for the rest of its empire’s subjects, so it took retaliatory economic measures, which led to Cuba taking further measures against U.S. corporations, eventually nationalizing all U.S. imperialist properties in Cuba. Since there was no real national bourgeoisie in Cuba, this ended large-scale capitalism in Cuba.

Karagiannis states,“this so-called “anti-imperialist process for national liberation” does not lead to a confrontation with the bourgeois class that still holds economic power.” While he is referring to Venezuela today, we should note that the cases of Cuba, and especially China, prove him wrong. If he were analyzing the Islamic Republic of Iran, he would be correct, but they of course do not say they are building socialism of any sort.

But Karagiannis is referring to Venezuela. Unlike the revolutions we have mentioned, Chavez came to power not through any revolutionary overthrow but by winning a bourgeois election. He became president of a bourgeois state, defended by a bourgeois army and bourgeois police force. He headed no revolutionary party. Venezuela remains a capitalist country, but it has gone very far towards educating and mobilizing to population towards overthrowing capitalist rule and running the country themselves.

It is true as Karagiannis states in the end of his article that so-called 21st Century socialism does not grasp what is required to create socialism in a country. If it were instituted piecemeal in Venezuela that would be unique in modern history. In Venezuela the economic power of the capitalist class in the system of production and distribution has been challenged, but not broken.

Unfortunately, Karagiannis’ approach, not one of solidarity with the new world being built in Latin America, but a sectarian attack on it, is not going to win him listeners there. By contrast, the Cubans have a wise and sound approach: work and fight side by side with them, help whenever possible, and let the peoples of those countries understand through comradely discussion and by seeing the example of Cuba.

The collapse of the Soviet Union was a great loss for the peoples of the world. But we ought to remember how it ended, and what people would learn from that end if we hold the Soviet bloc up as a model. The socialist countries in eastern or central Europe fell because the people mobilized against what they considered a government imposed by a foreign power. In the Soviet Union, a conflict broke out among the ruling layer, and the people basically sat on their hands and watched. In contrast, the imperialist-inspired coup in Venezuela brought hundreds of thousands out into the streets to protest, and the working people of that country crushed that coup in 2 days. There is no way around the fact that Venezuelans can say, “We knew that we were defending something that belonged to us so we came out to defend it. Obviously, the people in the Soviet bloc did not think their 20th century socialism belonged to them or that they needed to defend it. If they had it and didn’t want it, why should we build that here?”

A Communist who is out to teach 21st Century socialists a thing or two is going to have to answer that question to be taken seriously. Karagiannis avoids it altogether.

He could have gone beyond what sometimes sounds like a recital of a Communist manual and instead given an overview of what so-called 21st Century socialism has contributed to building socialism, and what it can itself learn from the positive aspects of 20th century examples. But as it is, his article reads like a self-righteous dogmatic attack, which would only reinforce negative feelings people have towards this Soviet era Marxism.