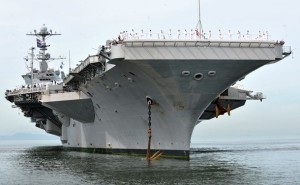 The following is from the website of the National Democratic Front of the Philippines:

The US Counter-Insurgency Guide confirms military assistance to “affected governments” like the Philippines in defeating the Communist Party of the Philippines, New People’s Army, and the National Democratic Front of the Philippines (CPP-NPA-NDF), which it calls “terrorist”. It is also a reassertion of US imperialism’s containment and engagement policy against its economic rivals in East Asia and the Pacific, to secure its geo-political interest in the region.

This unmasks the US-Aquino regime of its total disregard for the national sovereignty and its subservience to US imperialism remarkably within the first 100 days of office.

The arrival of the 6,000 crewmember-strong USS George Washington, accompanied by three missile-guided destroyers, is one of the most blatant in a string of recent incursions into Philippine territory, which deserves no less than the people’s outright condemnation.

It is not surprising for Aquino government, however, to have allowed this latest travesty committed by the US Armed Forces against the people’s sovereign right since Noynoy Aquino’s recent pre-programmed electoral victory was made possible by US imperialist machinations.

US imperialism, being on the brink of a deep economic crisis, is insistent on securing new territories to siphon out natural resources like gas reserves and to open new markets for consumers for its surplus products. Having failed to acquire gas reserves in Iraq and is now sucked in deep in the quagmire of a costly war there, the US imperial power simply turns its eyes on the Philippines as its “Second Front,” where rich oil reserves just narrowly lie below the soils in Sulu and Palawan, in Liguasan Marsh and in the Agusan-Compostela Valley basin.

US imperialism is foisting its military power on Southeast Asia, particularly in the Philippines, and flagrantly declares its flat out support for the Aquino regime’s counter-insurgency war against the revolutionary movement to secure its economic interest and maintain its politico-military hegemony in the region. This latest incursion is nothing short of the re-imposition of the US imperialist’s war against the Filipino people’s movement for democracy and national liberation.

In Mindanao in particular, this signals the escalation of a more aggressive military intervention aimed at ‘reducing to inconsequentiality’ both the New People’s Army (NPA) and the Moro people’s armed resistance.

It will no less embolden US soldiers, especially those who are already based in Mindanao, to involve themselves more directly in intensified military operations and espionage against the people’s revolutionary movement in the island and the rest of the country. As a result, more and more US servicemen, together with their local fascist counterparts, will figure in committing wanton abuses against human rights such as torture, enforced disappearances, threatening entire peasant and Lumad communities, indiscriminate firing, burning down of villages, psy-war tactics, the rape of our women, and, of course, extra-judicial killings.

The NDFP in Mindanao enjoins the Filipino people to bring it to the attention of the Aquino government that allowing US nuclear warships to impose itself on Philippine shores, in complete disregard of the Filipino nation’s sovereignty, is a step closer to betraying the people’s trust. If the Aquino government is at all for the defense of the nation’s best interest, it must protect the integrity and security of the people first before pandering to the interests of a foreign imperialist power.

We call on all those who, in the past, have boldly fought hard against the continued basing of US military forces in the country – nationalist statesmen, church people and others who have been moved by genuine love of country – to break the silence and step up to assert true nationalism by defending the Filipino nation’s sovereign right.