The following article by Mike Gold is from Fight Back! News: 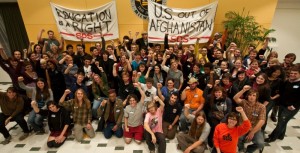 Milwaukee, WI – On Oct. 23-24, around 100 student activists from across the country converged here for the fifth Students for a Democratic Society (SDS) National Convention.

From Diablo Valley and Los Angeles, California, Dallas, Texas, Gainesville, Florida and College Park, Maryland, SDS chapters came together to share their experiences organizing locally and to discuss the two major campaigns – education rights and anti-war – that SDS has been leading nationally and to talk about the next steps for the student movement in the U.S.

The convention began with discussion around the recent FBI attacks on the anti-war and solidarity activists in the U.S., including one member of SDS at the University of Minnesota, Tracy Molm. Keynote speakers included Jess Sundin and Steff Yoerk , two targets of the FBI raids, who spoke to SDSers about their personal experiences and shared ideas for how to speak out against the raids locally.

Workshops that weekend included immigration rights, campaign building and a workshop hosted by the Chicano student organization MEChA. Two plenaries on the education rights movement and anti-war movement addressed those issues and how to continue to build them from a student perspective.

Student activists shared tactics, ideas and lessons with one another, hoping to help build the student movement’s struggle for justice – in the fight to stop the privatization of education, stop attacks on immigrants and in protesting the wars and occupations in Iraq, Afghanistan and Palestine.

“I felt the convention was a good opportunity to learn different methods of how to perform actions,” said Allan Brooks, who traveled over 20 hours from Gainesville, Florida to attend the convention. “If it wasn’t for different chapters meeting up then I wouldn’t have learned how to write legislation, I wouldn’t have learned how to do sit-ins or occupations.”

This fall’s convention marked the first time SDS has met since the historic March 4 and October 7 days of action for Education Rights, which rocked the nation with militant protests demanding an end to cuts to public education. “Nationally, SDSers had a lot of important experiences to share,” national SDS organizer Kas Schwerdtfeger said, “SDS has been the single largest student organization involved in the education rights movement and the knowledge shared will no doubt help make the movement even stronger.”

Students for a Democratic Society was formed in 2006, in response to the war in Iraq. It the largest multi-issue, national, grassroots student organization in the U.S. and does work around a variety of issues. So far this year, SDS nationally has helped organize and lead national days of actions around education rights on March 4 and Oct. 7, nationally coordinated days of action around the anniversary of the Iraq war in March and Arizona Freedom Summer. SDS will also be mobilizing students and youth to participate in the yearly demonstration at the School of the Americas (SOA) in Fort Benning.