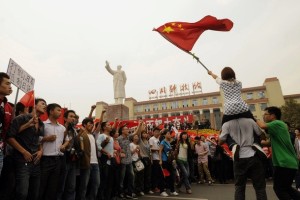 Fight Back! News Service is circulating the following article from the New China News Agency on the celebrations marking the 117th anniversary of Mao Zedong’s birth.

CHANGSHA, Dec. 26 (Xinhua) — People across China marked the 117th anniversary of the birth of late leader Mao Zedong on Sunday with various activities in his hometown in central Hunan Province as well as in other parts of the nation.

In Mao’s birthplace, Shaoshan village, villagers and visitors arrived in the early morning to observe a local tradition in celebration of Mao’s birthday — eating a bowl of noodles.

“Today is Chairman Mao’s 117th anniversary and many tourists came from afar on this special day just to have a bowl of ‘long-life noodles’ to show their respect towards the chairman,” said village official Mao Yushi.

The villagers and tourists then came to Mao Zedong Square where they paid tribute to the “Great Helmsman” by leaving behind bouquets at Mao’s bronze statue and singing the famous tune “The East is Red”, a song in tribute of Mao.

Meanwhile, nearly 10,000 citizens in Shaoshan – known as one of China’s “red tourism” sites – marked the date with a 5,000-meter foot race that started from Mao’s former residence and ended at the square in front of the Shaoshan Railway Station.

Shaoshan, now designated a landmark in China’s modern history, receives millions of people from home and overseas every year.

On the same day, memorial activities were held in other cities around the nation.

In Changsha, the capital city of Hunan Province, tourists and citizens braved the early morning chill to travel to Juzizhou island in the middle of the Xiangjiang River to pay tribute to the late chairman.

Mao’s poems were recited and songs and dances in tribute of Mao were performed on the island, where a 32-meter-high Mao statue was erected one year ago.

In Beijing, by mid-day more than 10,000 people had visited Mao’s Mausoleum on Tian’anmen Square, including Mao’s grandson Mao Xinyu, who presented a basket of flowers along with his family.

Similar activities were also held in provinces of Hebei, Gansu, Shanxi, Shandong and Henan to commemorate the founder of the New China, who was born on Dec. 26, 1893 and died on Sept. 9, 1976.

For those who were unable to come to Shaoshan or Beijing, they found alternative ways to express their respect of Mao.

“You will always live in the heart of the people and we shall cherish the memory of you forever,” one message reads.

This entry was posted in Marxism-Leninism, People's Republic of China and tagged China, Mao Zedong, PRC. Bookmark the permalink.