The following is from Fight Back! News:

The morning of Dec. 19 started like a normal Monday for the Korean staff at the Hae Dang Hwa restaurant in Beijing. The greeting staff welcomed hungry customers at the front door, the chefs began prepping their fine selection of kimchi and other Korean dishes and the waitresses and waiters began taking down orders for their guests. All of that changed when a China Daily reporter mentioned in a conversation with a waitress that Kim Jong-Il, the head of state for the Democratic People’s Republic of Korea (DPRK), had died that morning of a heart attack. In minutes, the entire Korean staff – from the waiters to the chefs in the kitchen – broke down in tears and, after apologizing to the customers, closed the restaurant early for the day so they could grieve the national tragedy together.

Several thousand miles away in Pyongyang, mass sorrow like that experienced in this Beijing restaurant took the swept the capital as men, women and children – from the most esteemed party official to the steel worker – took to the streets to mourn Kim’s death.

Most people in the United States have a hard time understanding the sorrow of the Korean people and the Western media spent the better part of the past few days ridiculing this mass display of grief. After all, it’s inconceivable to imagine the death of any U.S. leader – President or otherwise – eliciting unanimous mourning from the American people. Nevertheless, even the harshest critics could not deny the sincerity of the tears shed by the Korean people, both in the DPRK and abroad, on the morning of Dec. 19.

The Western media tells us that DPRK government is ruthlessly oppressive, and yet the Korean people’s reaction seriously contradicts this image. What is it about Democratic Korea and its leaders that cause its people, even those far away from the eyes of government authorities, to mourn like this? 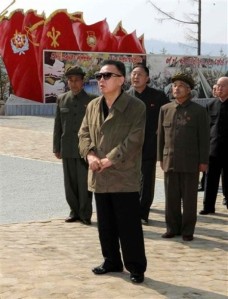 Misinformation presented by the Western media cause many to see Democratic Korea as a highly repressive, brutal regime with no accountability to the Korean people. A closer look past the slanderous – and often fabricated – claims reveal a strong nation, resilient in the face of more than a century of imperialist aggression that, against all odds, continues to mobilize the Korean masses in the process of building socialism.

Korea is a single nation that was forcibly divided by the United States immediately after World War II. To this day, the DPRK remains committed to reunification. After 35 years of horrifying treatment by Japanese colonizers, the Korean people’s brief hope for a single, unified Korea was dashed when the Truman administration launched a military campaign to violently suppress the Korean revolution. Aided by the Soviet Union and socialist China, the Korean People’s Army (KPA), led by Kim Il-Sung, pushed the U.S led invasion back to the 38th parallel, now the southern border of the DPRK.

Over the course of the Korean War, the U.S. dropped more bombs on Korea than it did in the entirety of the World War II Pacific theater, killing more than a million Koreans and destroying most of the north’s cities. Equally horrific was the execution of hundreds of thousands of suspected communist sympathizers by Syngman Rhee’s U.S.-backed fascist government, which took power in southern Korea.

Despite the destruction caused by the Korean War, the DPRK undertook an ambitious reconstruction effort that allowed them to enjoy a higher GDP and better standard of living than the U.S.-supported regime in the south, which consistently suffered from high unemployment and low wages brought on by Western sweatshops. It wasn’t until the 1980s and the eventual collapse of the DPRK’s largest trading partner, the Soviet Union, that the Republic of Korea would overtake the north in economic productivity.

The same CIA report points out that there are more college-educated women than men in the DPRK, and admits that the Workers Party of Korea legitimately committed to ‘radical change’ in Korean gender relations. The facts support their conclusion: Prostitution is outlawed, women are permitted to serve in the military, state child-care programs allow women to have independent careers outside of the house and a significant number of high level political positions are occupied by women, including representation in the Supreme People’s Assembly.

The DPRK’s remarkable public health care system – which provides unconditional universal coverage for citizens – continues to perform tremendously well, even in the midst of crippling U.S. sanctions. Just last year in a report to the United Nations on the North Korean health care system, Dr. Margaret Chan, the Director-General of the World Health Organization (WHO), called it “something which most other developing countries would envy.” She pointed out that the “DPRK has no lack of doctors and nurses,” and praised the system for its “very elaborate health infrastructure, starting from the central to the provincial to the district level.”

Imperialist aggression against this defiant revolutionary government continues to this day, manifesting itself in more than 28,000 U.S. troops permanently stationed in South Korea and the overhanging threat of U.S. Navy freighters carrying nuclear missiles in the Korean Peninsula.

Seeing the emboldened aggression of U.S. after the fall of the Soviet Union, the DPRK sought to insure their protection from another Korean War by acquiring nuclear weapons. Facing an onslaught of trade sanctions and the threat of invasion, Democratic Korea preserved and announced their first successful nuclear test in 2006, an achievement spearheaded by Kim Jong-Il.

The importance of Democratic Korea acquiring nuclear weapons cannot be overstated. In 2005, the U.S. presented an ultimatum to both Libya and the DPRK, demanding that both surrender their nuclear weapons programs and cooperate with Western imperialism in the ‘war on terror.’ Libyan head of state Muammar Gaddafi played ball. Kim Jong-Il gave the U.S. a figurative middle finger. As we near the end of 2011, having witnessed NATO’s brutal invasion of Libya and the toppling of Gaddafi’s government, it’s painfully clear who made the right choice.

Why do Koreans mourn the death of Kim Jong-Il? It’s because of his courageous defiance of U.S. domination, his commitment to the reunification and the real accomplishments of socialism. In the face of those who wage war for exploitation and oppression, Kim’s decisions represented the aspirations of Korean workers, peasants, women and children – the united Korean nation – for freedom. Although Kim Jong Il has passed away, the Korean people will continue to march forward raising the banner of national reunification, self-determination and revolution.

U.S. Hands off the DPRK!

This entry was posted in Democratic People's Republic of Korea and tagged Fight Back! News, Kim Jong Il. Bookmark the permalink.