The following very interesting article is being reposted here from Return to the Source in the hopes that it will help readers better understand issues facing contemporary China:

After the fall of the Soviet Union, most of the socialist countries tragically fell to the onslaught of Western imperialism. Among the horrific blows dealt to the international communist movement, five socialist states resisted the tide of counterrevolution and, against all odds, maintain actually existing socialism in the 21st century.

END_OF_DOCUMENT_TOKEN_TO_BE_REPLACED

Fight Back! News Service is circulating the following article from the New China News Agency on the celebrations marking the 117th anniversary of Mao Zedong’s birth.

CHANGSHA, Dec. 26 (Xinhua) — People across China marked the 117th anniversary of the birth of late leader Mao Zedong on Sunday with various activities in his hometown in central Hunan Province as well as in other parts of the nation.

END_OF_DOCUMENT_TOKEN_TO_BE_REPLACED

The following is from the Communist Party of Great Britain (Marxist-Leninist) See also the CPGB-ML’s related study of Mao’s “On Contradiction”:

An introduction to Comrade Mao Zedong’s seminal article on the role of practice in the development of human knowledge, and the relationship between theory and practice.

Mao Zedong began his famous article on practice by stating that “man’s activities in production determine all other activities”. Mankind, he explained, is defined by its relationship, through activity, to the means of production. In today’s society we are proletarian or bourgeois, exploited or exploiter, etc.

END_OF_DOCUMENT_TOKEN_TO_BE_REPLACED

The following article by Heiko Khoo is from China.org.cn:

Cuban President Raul Castro and the Cuban Workers’ Federation have announced a plan to reduce the state workforce by up to a million workers in the near future, signaling the start of profound changes. Cuban society is undoubtedly in need of radical reform. At present the state employs around 80 percent of the workforce and planning is supposed to control the entire economic system.

END_OF_DOCUMENT_TOKEN_TO_BE_REPLACED 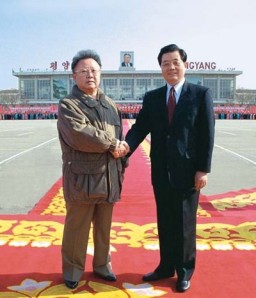 The following article is from the August 2010 issue of Proletarian, the journal of the Communist Party of Great Britain (Marxist-Leninist):

With June 2010 marking the 60th anniversary of the outbreak of US imperialism’s bestial war against the Korean people, which, over the ensuing three years, claimed some four million lives, tensions remain high on the Korean peninsula, involving not simply a confrontation between the socialist Democratic People’s Republic of Korea (DPRK) in the north on the one hand and the United States and its south Korean ally on the other, but also sharply increased tensions between the USA and China.

END_OF_DOCUMENT_TOKEN_TO_BE_REPLACED

The following article by  Deirdre Griswold is from Workers World:

Can it be just a coincidence?

After a wave of strikes at foreign-opened firms in China — strikes that were supported by the government and gained significant wage increases for the workers — the business media in the United States and other imperialist countries are complaining that China is taking an economic turn harmful to their interests.

END_OF_DOCUMENT_TOKEN_TO_BE_REPLACED

How the Communist Party of China Safeguards Workers’ Interests During Crisis

The following is the contribution of the Marxist Institute – Academy of Social Sciences People’s Republic of China, Prepared by Enfu Cheng and Shuoying Chen, researchers at Marxism Institute, Chinese Academy of Social Sciences, P.R. China, to the nineteenth International Communist Seminar on “The consequences of the economic crisis and the intervention of communist parties,” Brussels, 14-16 May 2010.

Since the global financial crisis broke out, the Communist Party of China has let government and trade unions play their full role in safeguarding workers’ interests with regard to employment and social security, etc.