The following article by Charla Schlueter is from Fight Back! News:

Phoenix, AZ – Tensions build as July 29 nears – the date set for the racist law SB1070 to go into effect. Under this law police officers will have the power to demand immigration papers from any person who they stop. Garage sales have already begun lining the streets of Arizona as families flee trying to escape the impending oppression.

END_OF_DOCUMENT_TOKEN_TO_BE_REPLACED 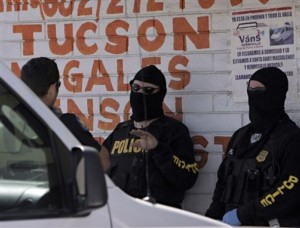 The following article by James Jordan is from Fight Back! News:

Tucson, AZ – “Tucson today is the moral equivalent of Birmingham, Alabama in 1961,” said Mike Wilson, border rights activist and Tohono ‘O’odham tribal member, at a rally at the Federal Building here, April 15. The rally was held in response series of raids that took place the same day in Phoenix, Tucson, Rio Rico and Nogales, and in the Mexican city of Nogales, Sonora. The raids targeted people traveling on shuttle services, but whole neighborhoods were affected, with traffic brought to a virtual standstill while agents occupied urban areas in the biggest such operation in the seven-year history of Immigration and Custom Enforcement (ICE).