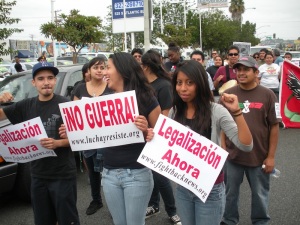 Youth marching to commemorate 40th anniversary of the Chicano moratorium. (Fight Back! News)

The following report and commentary by Carlos Montes is from Fight Back! News:

Los Angeles, CA – The powerful slogan “Chicano power” was heard here as marchers headed down Whittier Boulevard in the heart of East Los Angeles, Aug. 28. The 40th Chicano Moratorium against war had participants from as far away as El Paso, Texas and Arizona. Large numbers of high school and college students joined with the many veteran activists of the late 1960s. The march message was clear, “No to war” and “Legalization now.” Many onlookers smiled and waved to the marchers.