The following article by Brian Chroley is from Fight Back! News: 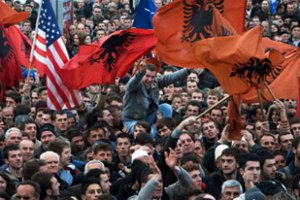 Amidst at sea of U.S. flags, the rulers of Kosovo announced its ‘independence’ from Serbia, Feb. 17. This declaration is the latest act in the west’s quest to destroy Serbia, a pillar of the former Yugoslavia. This statement of ‘independence’ was recognized by most of the members of the European Union as well as the United States.

On Feb. 15, the European Union voted to approve an illegal mission to Kosovo, where they will replace the United Nations presence there. The United States already operates the largest military base in all of Europe on Kosovo soil.