One year after the People’s Victory in El Salvador! 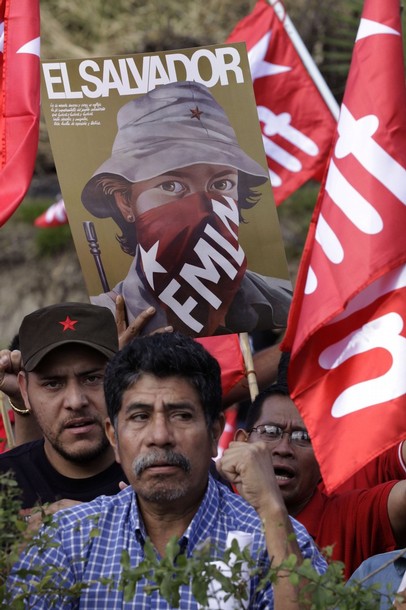 The following analysis is from the website of CISPES, the Committee in Solidarity with the People of El Salvador. See also the article FMLN Takes Power in El Salvador from a year ago:

On Sunday, March 14, the streets of San Salvador once again filled with red t-shirts, hats, bandanas and FMLN flags to commemorate the one-year anniversary of the victory of the FMLN’s presidential and vice-presidential candidates, Mauricio Funes and Salvador Sánchez Cerén (March 15, 2009). In a speech before the crowd of 25,000, historic leader of the FMLN and current Deputy to the Central American Parliament Nidia Díaz declared, “Today we reassert the effort and the heroism of thousands of compatriots that continue fighting and those that gave their lives, without which this victory would not have been possible.”

END_OF_DOCUMENT_TOKEN_TO_BE_REPLACED

The following press release and articles are from the Committee in Solidarity with the People of El Salvador (CISPES):

Second community activist killed in less than a week

On December 26, Dora “Alicia” Recinos Sorto, age 32, was assassinated, the second anti-mining activist killed this week in the small community of Nueva Trinidad in the department of Cabañas. Recinos Sorto was eight months pregnant and carrying her two-year old child when she was shot on her way back from doing laundry at a nearby river. She and her husband, José Santos Rodriguez, were outspoken opponents of the non-operational El Dorado mine which Pacific Rim, a Vancouver-based mining company is desperate to reopen despite widespread community opposition.

END_OF_DOCUMENT_TOKEN_TO_BE_REPLACED

The following is from CISPES – the Committee in Solidarity with the People of El Salvador:

US State Department must respond to false statements threatening immigrants

On the eve of the first round of El Salvador’s most contested elections since the 1992 Peace Accords, a right-wing campaign of dirty propaganda, media misinformation, provocation and violence continues to escalate. Beginning in late October and continuing to this day, Fuerza Solidaria—a right-wing organization founded in Venezuela—has flooded the Salvadoran airwaves and streets with a series of advertisements attempting to frighten Salvadoran voters with threats of U.S. retaliation. The ads state that an FMLN victory would mean the end to good relations with the U.S. government and thus the end to remittances sent home from Salvadorans living in the U.S. They also claim that an FMLN victory would threaten the Temporary Protective Status (TPS) which allows over 200,000 Salvadorans to remain in the U.S. These absurd threats are similar to the ones made back in 2004 by members of the U.S. Congress, together with the governing ARENA party; such threats turned a close election into a decisive victory for the right-wing party. In the face of Fuerza Solidaria’s blatant misrepresentation of the ramifications of an FMLN victory, the U.S. State Department—which has privately pledged neutrality in El Salvador’s electoral process—has remained silent rather than refute these claims.