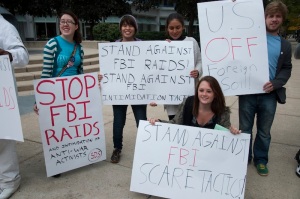 The following article by Kas Schwerdtfeger is from

Milwaukee, WI – Students and community members held a rally in front of Milwaukee’s Federal Building to protest the Sept. 24 FBI raids on anti-war activists in the Midwest and elsewhere in the United States.

Student speakers included Students for a Democratic Society (SDS) in Waukesha and Milwaukee, as well as the Chicano organization MEChA.

END_OF_DOCUMENT_TOKEN_TO_BE_REPLACED 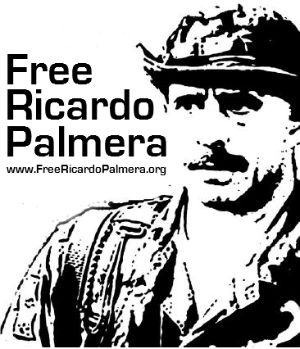 National Committee to Free Ricardo Palmera activist Josh Sykes sent out a message yesterday to members of the anti-censorship group on facebook stating that a new official facebook page had been created for the NCFRP:

Get it while it lasts!

Become a fan, get updates on the campaign, oppose U.S. intervention in Colombia, stand up for justice, and oppose facebook censorship!

This is part of an ongoing struggle for Colombia solidarity activists to use the popular social networking site as a tool to organize, despite ongoing attacks and censorship from facebook.

END_OF_DOCUMENT_TOKEN_TO_BE_REPLACED

The following statement is from the National Committee to Free Ricardo Palmera:

The National Committee to Free Ricardo Palmera is calling on supporters to send birthday cards to Ricardo Palmera, a Colombian revolutionary and prisoner of the U.S. Empire. July 30th, 2010, marks Professor Palmera’s 60th birthday, which he will celebrate alone in a Colorado Supermax prison.

END_OF_DOCUMENT_TOKEN_TO_BE_REPLACED

The following article by Tom Burke is from Fight Back! News:

The U.S. government is stepping up its surveillance and harassment of U.S. activists in an attempt to intimidate them and dampen their spirits for the change we believe in. International solidarity activist James Jordan was returning from a two week trip to Haiti, on Jan. 7, five days prior to the terrible earthquake disaster. When his flight touched down in Fort Lauderdale, Florida, flight attendants called out for “James Patrick Jordan” and asked him to come to the front of the airplane. Homeland Security came on board the airplane to escort him off.

END_OF_DOCUMENT_TOKEN_TO_BE_REPLACED 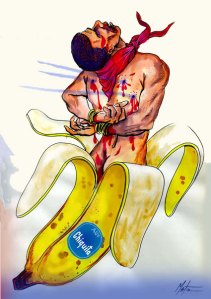 The following is from CounterPunch. For more on the Chiquita paramilitary case, see the documentary, Chiquita: Between Life and Law, as well as the material collected on the website of the Colombia Action Network:

In its most recent edition, the magazine, “Super Lawyers,” gave its cover story to the General Counsel of Chiquita Brands International, praising him for navigating the complex and difficult waters of Colombia. What it failed to mention is the trail of tears in Latin America left behind by Chiquita (formerly United Fruit, the architect of the 1954 coup in Guatemala as well as the 1928 massacre of striking banana workers in Cienaga, Colombia memorialized in One Hundred Years of Solitude). The following letter, by union labor lawyer, Dan Kovalik highlights the contradictions in the applause given to Chiquita. We note that, just after this letter was written, Chiquita also received (quite ironically) a “sustainability award” for its business abroad.

END_OF_DOCUMENT_TOKEN_TO_BE_REPLACED

The following is being reposted here from the website of the Colombia Action Network:

Caracas, 20 December – Venezuelan President Hugo Chávez revealed today on his Sunday television and radio program, Aló Presidente, that unmanned aerial vehicles (UAVs), also known as drones, have illegally entered Venezuela’s airspace during the past several days. “A few days ago, one of these military planes penetrated Venezuela as far as Fort Mara,” a Venezuelan military fort in the State of Zulia, bordering Colombia. The drone was seen by several Venezuelan soldiers who immediately reported the aerial violation to their superiors. President Chávez gave the order today to shoot down any drones detected in Venezuelan territory. Chávez also directly implicated Washington in this latest threat against regional stability by confirming that the drones were of US origen.

END_OF_DOCUMENT_TOKEN_TO_BE_REPLACED

FARC and ELN on the road to unity

The following article, outlining a joint FARC-ELN statement posted in Spanish on ANNCOL, is from the bourgoeis Latin American Herald Tribune, which, it should be noted, promotes anti-guerrilla misinformation and should be read with skepticism:

BOGOTA – Colombia’s two largest guerrilla groups will join forces in the fight against the government of President Alvaro Uribe, leaders of the FARC and ELN said in a communique posted Wednesday on the Internet. 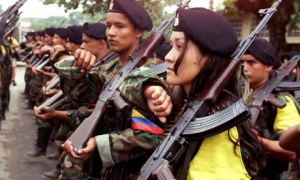 “We aim to work for unity to confront the current regime with firmness and belligerency,” said the message from the respective high commands of the Revolutionary Armed Forces of Colombia and the National Liberation Army.

“Only the unity and decisive action of patriotic Colombians, of democrats, of revolutionaries and of all of us who harbor hopes of a political solution will be able to stop the war, find peace and make possible the construction of a New Colombia,” the insurgents said.

The statement “from the mountains of Colombia” bore a date of November 2009 and appeared on the site of Stockholm-based leftist news agency ANNCOL. 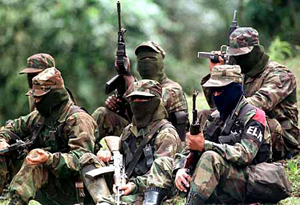 The outline of the plan for cooperation was drawn up after extensive talks in an “atmosphere of fraternity and camaraderie,” the communique said.

“We also addressed the difficulties that have occurred between the two organizations,” the rebel groups said, proclaiming an end to ongoing internecine strife “from the publication of this document.”

The FARC and ELN chiefs said they would determine the “real causes that have led us to this absurd confrontation in some regions of the country, overcome them and work to repair the damage caused.”

Looking forward, the two organizations vowed to concentrate on their common enemy: “U.S. imperialism and its lackey (Colombian) oligarchy.”

Bogota receives about $500 million a year in mainly military aid from Washington and recently signed a pact giving U.S. forces access to seven bases in Colombia.