The following is the Domestic section of the Main Political Report from the 6th Congress of the Freedom Road Socialist Organization. The Economic section has been previously published, and the section on the international situation is forthcoming.

For the past three years, the conditions shaping domestic politics in the United States have been marked by the economic crisis, a qualitative shift away from the free market capitalism of Ronald Reagan on the part of the bourgeoisie, and a leftward political shift amongst the people. The massive economic and financial crisis, which began in December 2007, and the continuing decline of U.S. imperialism globally, have come together to judge the Reagan Era and its aftermath as a failure.  The economic crisis swept from power the party of George Bush and brought into office the first African-American President of the United States–Barack Obama.

This set of qualitative changes is in part the foundation of and in part manifestations of a new period.  It is this new set of conditions which sets the context for the peoples struggle against U.S imperialism.

END_OF_DOCUMENT_TOKEN_TO_BE_REPLACED

The following article is from Workers World newspaper:

Glenn Beck, an extreme right-wing pundit of television and radio, has shown his outrageous racism and anti-working-class sentiments once again when he told us that Barack Obama “has a deep-seated hatred for white people” and that a massive “invasion” by undocumented workers “threatens our America.”

Beck’s anti-communism is not new, either. But he made clear his dedication to the capitalist system and racism on June 4 in a pseudo-historical lecture on his radio show. Proclaiming that the author “was doing the same things that we are doing now,” Beck promoted “The Red Network,” a book written in 1934 by virulent anti-communist Elizabeth Dilling.

END_OF_DOCUMENT_TOKEN_TO_BE_REPLACED

Continuing the Struggle for Immigrant Rights in 2010

Posted on February 13, 2010 | Comments Off on Continuing the Struggle for Immigrant Rights in 2010 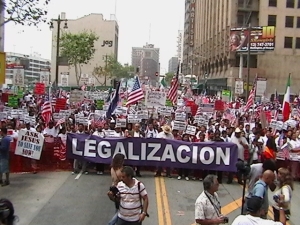 The following editorial is from Fight Back! News:

One year ago Chicanos, Mexicanos and Central Americans celebrated the end of the eight years of Bush administration. In addition to launching two wars and ushering in the greatest financial crisis since the Great Depression, the Bush administration stepped up repression against immigrants. Raids and deportations of workers by the Immigration and Customs Enforcement (ICE) doubled, redoubled and then doubled again under Bush. The Bush administration implemented the notorious 287(g) program, where ICE teamed up with local police and sheriffs allowed racists such as Arizona sheriff Joe Arpaio to harass Chicanos, Mexicanos and Central Americans. The October 2006 “Secure Fence Act” stepped up the militarization of the U.S.-Mexico border, contributing to the deaths of more and more immigrants trying to enter the United States.

END_OF_DOCUMENT_TOKEN_TO_BE_REPLACED

Comments Off on Continuing the Struggle for Immigrant Rights in 2010

North Carolina: A Victory Won in Struggle Against White Supremacists at UNC

Haley Koch, one of the defendants, speaks at a rally outside the courthouse

Chapel Hill, NC – Haley Koch and six community activists had their first court date June 1, for their participation in the Tom Tancredo and Virgil Goode protests that took place in April. These protests were in response to a far right-wing organization, Youth for Western Civilization, that brought two anti-immigration speakers, Tom Tancredo and Virgil Goode, to the University of North Carolina campus within a week of each other. Hundreds of students and activists protested the racism, xenophobia and white supremacy that these speakers promoted and seven demonstrators were arrested by campus police in response. They all pleaded not guilty, even after being offered a deal by the district attorney which would lighten their sentence in return for admission of guilt. The seven are standing strong in their belief that they did no wrong in protesting racism and white supremacy on UNC’s campus and will represent themselves in their next court date, Sept. 14.

END_OF_DOCUMENT_TOKEN_TO_BE_REPLACED

The following is from Fight Back! / ¡Lucha y Resiste!

A New Pamphlet on the Struggle for Immigrant Rights

After years of struggle and massive marches, justice for immigrants appears closer to reality, but we must continue to hit the streets to demand full legalization and an end to the repressive ICE detentions and deportations. It is also a time to sum up our lessons and history of struggle. This is why I encourage you to read the new pamphlet, The Immigrant Rights Movement and the Struggle for Full Equality just published by Freedom Road Socialist Organization.

Carlos Montes is a long-time activist in the Chicano community and the struggle for immigrant rights.

On May 1, International Workers Day, millions upon millions will be marching against the capitalist economic crisis that has engulfed most of the world. Working people in Africa, Asia, Europe, Latin America, the Middle East and North America will hit the streets to protest the soaring unemployment, shorter hours and cuts in pay that are sweeping the world.

END_OF_DOCUMENT_TOKEN_TO_BE_REPLACED

The following is from Freedom Road Socialist Organization:

In 2006 there was a huge upsurge in the Immigrant Rights movement, peaking on May 1, when some two million people marched across the country. At the core of this movement is the struggle of Chicanos, Mexicanos, and Central Americans for self-determination and full equality. This paper presents the views of the Freedom Road Socialist Organization (FRSO) on the current immigrant rights movement and the struggle for Chicano, Mexicano, and Central American liberation.

In our “Statement on National Oppression, National Liberation and Socialist Revolution” (FRSO, 2004), we say that “It is imperialism that still dominates the countries of the Third World, forcing more immigrants to come to the United States to escape poverty and repression.” This is certainly true for immigrants from Mexico and Central America. The North American Free Trade Agreement (NAFTA) has opened up the Mexican economy to even greater penetration by U.S. multinational corporation and agribusiness, driving millions from their hometowns to seek work in the cities and the United States. U.S.-backed governments and counter-revolutionaries in Central American have violently attacked popular movements and governments, leaving economic devastation in their wake, driving hundreds of thousands more to the United States.

Once here in the United States, immigrants from Mexico and Central America face intense national oppression, rooted in the U.S. conquest and seizure of Northern Mexico. Mexicans in the this territory, which today make up the states of California, Nevada, Arizona, Colorado, New Mexico, and Texas, were dispossessed of their lands, their language suppressed in schools, and the culture denigrated, and forced to work in the mines, fields, and homes of the capitalists. Thus the Mexican people of the southwest were forged into an oppressed nation, the Chicano Nation, with a common territory, economy, and culture and the right to self-determination, up to and including secession from the United States.

Generations of immigrants from Mexico who have settled in the southwest have been assimilated into the Chicano Nation. Mexican immigrants and their children are changing the demographics of the southwest, as more and more majority Chicano counties emerge, strengthening the demand for self-determination. This so-called “Browning of America” is striking fear into the racist monopoly capitalist class that rules America, but is welcomed by revolutionaries and communists who seek to weaken and ultimately overthrow this class.

END_OF_DOCUMENT_TOKEN_TO_BE_REPLACED

Fight Back! is circulating the following statement issued by the Students for a Democratic Society (SDS) at Chapel Hill, North Carolina.

END_OF_DOCUMENT_TOKEN_TO_BE_REPLACED

The following open letter, along with numerous other letters of support and statements of solidarity, is from the UNC Chapel Hill SDS website. Though I may not agree with every word of it, I am reposting here as it gets into some of the debate about ‘free speech’ raging over UNC students recent and heroic protest of white supremacist Tom Tancredo. For more information, please see UNC Chapel Hill students stand up for Immigrant Rights.

I want to express my concerns over the events of April 14, 2009. Currently, I am a Doctoral Candidate and Teaching Fellow in the Department of Communication Studies specializing in the rhetoric of social protest. I have been a part of the UNC system for 6 years and a student and member of the UNC-Chapel Hill community for over 4 years. During that time I have witnessed some of UNC’s proudest, shining moments and consider those less shining to be opportunities for growth and progress. As a member of this community, a first-hand witness to the protest events on April 14th, and as a scholar of free speech issues, I believe it is my responsibility to address what I see as precisely one of those opportunities.

END_OF_DOCUMENT_TOKEN_TO_BE_REPLACED

The following is from Fight Back! News:

Chapel Hill, NC – Over 200 protesters gathered here on April 15 to protest a talk given by the racist former congressman Tom Tancredo. Students, faculty and staff were in the streets and the lobby of the building chanting, “Shut it down – no racists in our town!” Some protesters were inside the room where the talk was being held and challenged Tancredo on his anti-immigration views while holding banners saying “No dialogue with hate,” and “No one is illegal.”