The following is from the website ML Today. It is all the more important to understand this important episode of our history given the current McCarthyite witch-hunt being carried out against anti-war and international solidarity activists.

Prof. Roger Keeran, a labor and policy studies coordinator at the Harry Van Arsdale Jr. Center for Labor Studies in New York, explains what McCarthyism was and was not during the 50’s. Dr. Keeran is author of the history, The Communist Party and the Autoworkers Unions.

He spoke in Vancouver, Canada in early December 2010 at a conference organized by the World Peace Forum (http://pasifik.ca/node/28792).

CP of Greece (KKE) on the theory of “21st Century Socialism”

The following article is by Dimitris Karagiannis, who is a member of the editorial board of the daily Rizopastis, organ of the Central Committee of Communist Party of Greece (KKE). The article appears in a collection recently published by the KKE. It is originally from Rizopastis, and is being republished here from the website MLToday:

The positive developments that have taken place during the last years in several Latin American countries (Venezuela, Bolivia, Ecuador, Nicaragua, Uruguay, Paraguay, Chile, Argentina, Brazil, recently in El Salvador, Honduras), to a different extent and depth in each country, have created important expectations as well as various confusions and illusions throughout the world.

END_OF_DOCUMENT_TOKEN_TO_BE_REPLACED

MLToday on the 29th Convention of the old CPUSA

The following article is being posted here not as a full endorsement of the views expressed therein but rather to share some insights on the Right opportunist line in the old Communist Party USA.  It is originally from the website Marxism-Leninism Today: 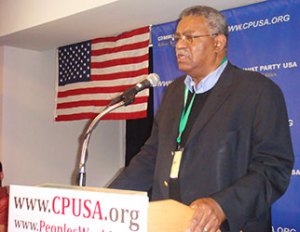 CPUSA Executive Vice Chair Jarvis Tyner speaking in front of the flag of U.S. imperialism at the 29th CPUSA convention

[ML Today editor’s note:  a number of delegates to the recent CPUSA convention have forwarded to MLToday the following document, reflecting their considered, collective opinion of the 29th CPUSA Convention.]

Many friends and comrades have asked us:  what really happened at the CPUSA Convention on May 21-23, eleven weeks ago, at Party headquarters in New York City?

So far, there are only the self-congratulatory appraisals, one by Party chair Sam Webb and another by his supporter John Case. Both are champions of the social reformist trend in the Party.

END_OF_DOCUMENT_TOKEN_TO_BE_REPLACED

The following article by Zoltan Zigedy is from Marxism-Leninism Today:

Tuesday, April 27, 2010 is a red letter day for the harbingers of debt disaster. That date marks the first meeting of the new National Commission on Fiscal Responsibility and Reform, a commission established by President Obama to outline cuts in government spending to reduce the national debt.

END_OF_DOCUMENT_TOKEN_TO_BE_REPLACED

CP of Cuba: We will defend the truth with our ethics and our principles

The following article was the lead editorial in Granma on April 8th.  Granma is the official organ of the Central Committee of the Communist Party of Cuba. It is being reposted here from ML Today.

The empire and its allies have launched a new crusade in an attempt to demonize Cuba. Its powerful political and media machinery has set in motion a colossal operation of deception with the object of discrediting the revolutionary process, destabilizing the country and provoking the conditions for the destruction of our social system.

In this heated campaign they are using their mercenaries at their whim. In order to obtain shameful political dividends they are tossing them to their deaths without the most minimal concern for those human beings; just as they have never cared about the death of more than 3,000 Cubans as a result of acts of terrorism organized and financed from the United States, or the fate of the 2,000-plus compatriots mutilated by those abominable acts, or citizens who have perished in the Strait of Florida having launched themselves on ill-fated adventures after the siren calls of the murderous Cuban Adjustment Act.

END_OF_DOCUMENT_TOKEN_TO_BE_REPLACED

Posted in Marxism-Leninism, Republic of Cuba

Right Opportunism in the CPUSA

The following is a discussion article for the upcoming Communist Party USA national convention. I am reposting it here from ML Today as an exploration of the development of Right Opportunism in the CPUSA. As Comrade Stalin has said, “Under capitalist conditions the Right deviation in communism signifies a tendency … of a section of the Communists to depart from the revolutionary line of Marxism in the direction of Social-Democracy.” For an important analysis of the historical roots of Right Opportunism in the CPUSA, see Harry Haywood‘s article, “The Degeneration of the CPUSA in the 1950s.” See also the section on antirevisionism of the Marxist-Leninist Study Guide:

The Old Bug of Right Opportunism Returns
by Mark Anderson

Although Marxist-Leninist terminology has fallen out of vogue with the top leadership of our Party, there’s no avoiding the use of precise, scientific language if one is to analyze contemporary phenomena from a Communist point of view. To do so would be like trying to have a discussion of Newtonian physics without using words like force or matter.

For several years our Party has been suffering from the corrosive effects of what Marx, Lenin and other Marxists called opportunism, specifically right opportunism. This was not name-calling on their part, but was instead an attempt to define a historically determined phenomenon that persists to this day.