This is a trailer for the movie “Woman Rebel“, a documentary about “Silu” a battalion commander in the Nepalese Maoist’s People’s Liberation Army. It will air on HBO tonight August 18 at 8pm and again August 26 at 11:45am. Check out the synopsis on HBO’s website.

The following article is from The Red Star, newspaper of the Unified Communist Party of Nepal (Maoist):

Kathmandu, Apr. 3 – The two party unity completes today. UCPN-Maoist and the CPN-Unified have declared the party unity organizing a big gathering in National Assembly House in the capital city Kathmandu. The unity was declared after the unity was done in party office.

END_OF_DOCUMENT_TOKEN_TO_BE_REPLACED 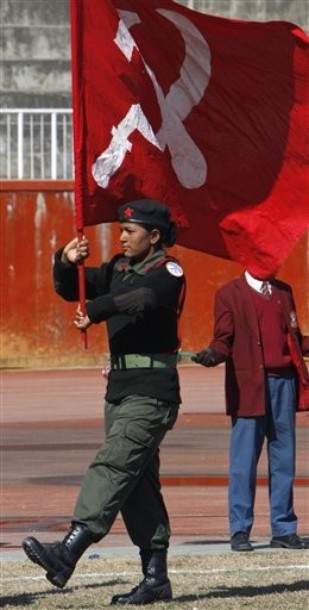 The following statement is from the Unified Communist Party of Nepal (Maoist):

Greetings of 15th Anniversary of the People’s War

On the auspicious occasion of the 15th Anniversary of the Great People’s War launched with the goal of new democratic revolution, we extend our heartfelt Best Wishes and militant salutation to the entire Nepalese people and working people the world over. In this historic occasion, we would like to remind you the reality that the Nepalese revolution is heading towards the decisive turning point of great possibilities and serious challenges. On this occasion, expressing our emotional homage to all the great martyrs of People’s War, we would like to recall with high regard the disappeared fighters. We revise our strong resolution and firm commitment to move forward to the direction of ceaseless revolution to make the Great Dreams of the Martyrs come true. On this historical occasion of the People’s War Day, we express our deep sympathy to the wounded, disabled and the victims suffering from the damage of life and property in the course of people’s war.

END_OF_DOCUMENT_TOKEN_TO_BE_REPLACED

The following is from the website of the Unified Communist Party of Nepal (Maoist):

The Standing Committee Meeting of our glorious party, the Unified Communist Party of Nepal (Maoist), was held from January 27, 2010 to February 3, 2010. Clarifying the historical tasks before the party, movement and the Nepalese people, the meeting, which was held at a very serious and sensitive turning-point of our country, was successfully concluded by preparing guideline and plan to accomplish them. This press release has been issued to make public the important decisions of the meeting, which was chaired by Party Chairman Comrade Prachanda.

END_OF_DOCUMENT_TOKEN_TO_BE_REPLACED

Maoist leader Dr. Baburam Bhattarai shouts anti-government slogans during a sit in protest in front of the main secretariat Singha Durbar in Kathmandu November 13, 2009. Maoist activists closed all the entrances to the main government secretariat on the second day of their protest against the president's reinstatement of the army chief. REUTERS/Shruti Shrestha

The following interview with Dr. Baburam Bhattarai, a leader of the Unified Communist Party of Nepal (Maoist), was conducted by members of the World People’s Resistance Movement (Britain & Ireland) who recently spent six weeks on a delegation in Nepal during August and September 2009 :

WPRM: Thank you for meeting with us today. In your article in The Worker #4 ‘The Political Economy of the People’s War’ you write that “the transformation of one social system into another, or the destruction of the old by the new, always involves force and a revolutionary leap. The People’s War is such a means of eliminating the old by a new force and of taking a leap towards a new and higher social system.”

Why then did the Maoist party enter the peace process and attempt to change society through Constituent Assembly elections?

Baburam Bhattarai: This is a very important question related to the basic tenets of Marxism-Leninism-Maoism (MLM).

The basic motive force of history is the contradiction between the existing level of productive forces and the production relations within society. At a certain stage this contradiction sharpens and there is a break with the old relationship and a leap to the new one. We call this social revolution. That leap necessarily confronts a certain force, because every set of productive relations is backed by a state, and the state means basically the organised force of the army.

To break with the old mode of production and leap into a new one, you have to break all the relations within the state backed by the army. And that inevitably requires the use of force. This is a law of history and a basic principle of MLM which nobody can revise. If you revise or abandon it then you are no longer a Marxist. There is no question of our party ever ending this basic principle.