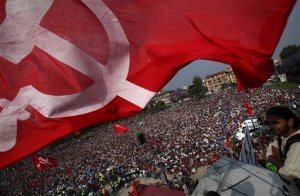 The following article is from the Associated Press:

KATMANDU, Nepal — Tens of thousands of former communist rebels and their supporters rallied in the capital Saturday demanding Nepal’s coalition government be disbanded and replaced by a Maoist-led government.

Prime Minister Madhav Kumar Nepal refused to resign and instead called on the Maoists to resolve the Himalayan country’s political crisis through dialogue.

In response, Maoist leader Pushpa Kamal Dahal announced to cheering supporters they would launch an indefinite general strike from Sunday.