Questions and Answers with Comrade Prachanda

Thanks to Revolution in South Asia for posting these videos from the Q&A section of Comrade Prachanda’s speaking event at the New School in NYC, September 26th. After leading the Communist Party of Nepal (Maoist) and the People’s Liberation Army in a decade long People’s War to topple the hated monarchy, Prachanda was elected Prime Minister of a revolutionary coalition government charged with writing a new constitution. The audio of the program is available as well. The video below is in five parts.

We are being encircled by the reactionaries: Interview with Comrade Basanta

The following interview is from the Communist Party of Nepal (Maoist)’s paper, The Red Star: 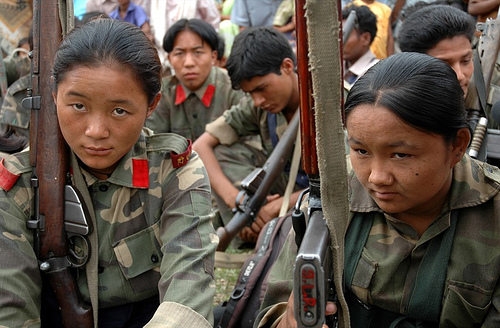 We are being encircled by the reactionaries

The CPN (Maoist) is now at the stage of peaceful revolution. Revolution in itself is meant to politically overthrow the enemy from state power. How can you recognize your enemy at this peaceful stage?

Generally speaking, the revolution is meant to violently overthrow the class enemy from the state power. However, one must not one-sidedly understand that the revolution necessarily takes a violent form all through its course. The form of struggle is determined not by the subjective wish of the struggling forces but of course by the objective condition and the balance of forces at the given period. At a certain juncture and certain condition, the revolution can develop in a peaceful way. Our participation in the two negotiations in the past and the present peace process are examples of peaceful development of revolution. Nevertheless, it is wrong to categorically separate revolution as two distinct stages, the violent or peaceful, as your question points to. END_OF_DOCUMENT_TOKEN_TO_BE_REPLACED

The following article is from Himal Southasian. It is written from the perspective of an Indian NGO and pro-Indian government think tank, the Institute for Conflict Management. The article is interesting, and my posting it here is for informational purposes only. This is absolutely not an endorsement of the views expressed within, and it should be understood that such an article may contain misinformation.

The riot of red flags

The strategies and tactics of the Naxalites are there for all to see, but the Indian establishment is yet to understand this agenda of ‘protracted warfare’.

India’s Naxalite movement – to which contemporary Indian Maoists directly trace their lineage – emerged as a wildfire insurrection in 1967 in the Naxalbari area of North Bengal. After a few years of dramatic violence, however, that movement was comprehensively suppressed by 1973, with the entire top leadership of what was then the Communist Party of India (Marxist-Leninist), either jailed or dead. What little remained of its splintered survivor organisations was destroyed during Indira Gandhi’s Emergency of 1975. It was with the formation in 1980 of the People’s War Group (PWG) – under the leadership of Kondapalli Seetharamaiah, an erstwhile Central Organising Committee member of the CPI (ML), in the Telengana region of Andhra Pradesh – and the reorganisation of the Maoist Communist Centre (MCC) in Bihar in the mid-1980s, that the movement resurfaced in some strength. END_OF_DOCUMENT_TOKEN_TO_BE_REPLACED

Documentary about People’s War in India

Here is an interesting two-part documentary about the communist people’s war in India. Of particular interest is the discussion of the dreadful Salwa Judum death squads.

The following statement has been issued by the Central Secretariat of the Communist Mazdoor Kissaan Party Pakistan (Communist Workers Peasants Party – CMKP) on the American or NATO military incursions into the sovereign territory of Pakistan. I am reposting this from Red Diary.

Theory of Communism, a solution to the Capitalist system! - CMKP

Increasing horrendous and horrifying wanton American military intrusions into the sovereign Pakistani territory smack of imperialist gunboat diplomacy for US hegemony in the region in order to perpetuate its military occupation of Afghanistan where the NATO forces or US-led coalition soldiers have actually failed to subdue the indigenous resistance in whatever form that is another issue. The crux of the matter is foreign invasion and military occupation of Afghanistan that was an independent and sovereign country which has been enslaved by the US imperialism. END_OF_DOCUMENT_TOKEN_TO_BE_REPLACED

Prachanda to speak in New York

The following is from the India China Institute at the New School.

India China Institute, in partnership with Nepali organizations, invite you to attend:

A MAOIST VISION FOR A NEW NEPAL

Nepal’s Prime Minister, Pushpa Kamal Dahal, also known as Prachanda (‘The Fierce One’), came to power in August 2008 following his party’s success in the country’s first-ever Constituent Assembly elections. Chairman of the Communist Party of Nepal (Maoist) and leader of its People’s Liberation Army, he led a decade-long People’s War (1996-2006) with the goals of ending Nepal’s monarchy and creating a new federal republic. END_OF_DOCUMENT_TOKEN_TO_BE_REPLACED

The following is from the Nepal Constituent Assembly Portal. For more on Nepal where the Communist Party of Nepal (Maoist) now leads a revolutionary coalition government following a decade-long people’s war, please see my other posts in the Nepal section of The Marxist-Leninist. This article is from the Conflict Study Center, an NGO, and as of yet, this article is the only english language source that I know of that contains even so much as excerpts of the new Common Minimum Program. This is important for those interested in the Nepalese Revolution and where it is going. I have added some formatting (bold headings for ease of reading) to the original article: