Occupation of an administration building at UCLA on March 4th. (Fight Back! News)

The following statement by Freedom Road Socialist Organization is from Fight Back! News:

The March 4 national day of action for education was a huge success! Over 100,000 people marched, rallied and took action at over 100 schools and colleges. The biggest protests were in California, both on college campuses and in city streets. College students and union members joined parents with their children, as well as high school students, to demand education funding from the state government. Across the country, students, union workers and faculty marched across campuses and rallied outside administration buildings, while administrators hid or snuck out the back door. In some cases university chancellors and presidents locked themselves inside their offices surrounded by police while students tried to deliver petitions.

END_OF_DOCUMENT_TOKEN_TO_BE_REPLACED 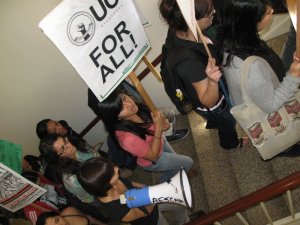 The following article by Kati Ketz is from Fight Back! News:

Thousands of students, workers and faculty at over 100 campuses in at least 39 states participated in a national day of action March 4. One demand was that administrators and chancellors must quit raising tuition and fees. Another demand was that theycut the salaries of the highest-paid administrators instead of the lowest-paid staffers on campus. Many of the protests opposed layoffs. Actions ranged from walkouts and marches, to occupations and shut-downs, to teach-ins and movie showings.

END_OF_DOCUMENT_TOKEN_TO_BE_REPLACED

The following article by Eric Gardner is from Fight Back! News:

Los Angeles, CA – As the March 4 Day of Action draws closer, campuses across California are getting restless.

The latest series of struggles began Feb. 24, on the campus of UC Irvine. That morning, a group of about 20 students and workers took over the campus administration building. The action began as a sit-in, but by noon students had locked down the building and barricaded the entrances with dumpsters. Their list of demands included a revocation of the 5% furloughs imposed on service workers, financial aid for undocumented students and greater investment in ethnic, queer and women’s studies programs. Police dismantled the barricades by the afternoon, and students were released after being briefly detained.

END_OF_DOCUMENT_TOKEN_TO_BE_REPLACED

Students protest at UCLA in 2009 (Fight Back! News/Staff)

The following article is from Fight Back! News. See also the FRSO pamphlet On the Student Movement in the United States by Josh Sykes.

The Student Commission of the Freedom Road Socialist Organization (FRSO) met over the 2009 winter break to discuss education rights, building a movement against war and occupations in Afghanistan and Iraq, fighting racism on campus and supporting immigrant rights. FRSO students came from as far as California and Florida, with large delegations from the South and Midwest. With a burning desire for social justice, the national cold wave could not stop them.

END_OF_DOCUMENT_TOKEN_TO_BE_REPLACED

The Marxist-Leninist’s Top Ten of 2009

Happy New Year! Here are the top ten posts of 2009, highlighting some of the key political moments for the people’s struggles around the world over the past year. They have been selected by The Marxist-Leninist based on their popularity as well as their overall political significance.

END_OF_DOCUMENT_TOKEN_TO_BE_REPLACED

The following articles are from Fight Back! News:

For background, see: University of California Walkouts Show the Way and ‘Education is a Right, Not a Privilege for the Rich’