Osama Bin Laden and the legacy of the ‘war on terrorism’

The following commentary by Kosta Harlan is from Fight Back! News:

As the news of Osama Bin Laden’s killing by U.S. forces inside Pakistan reverberates across the world, it is a good time to take stock of the ‘war on terror’ and what it has brought to the world.

Ten years of the “war on terror”

A few days later, Bush said, “Our war on terror begins with al Qaeda, but it does not end there. It will not end until every terrorist group of global reach has been found, stopped and defeated.”

END_OF_DOCUMENT_TOKEN_TO_BE_REPLACED

Afghan civilians in bus gunned down by U.S. troops

Afghan police and onlookers gather around a bus which was fired upon by foreign forces in Kandahar April 12, 2010. Foreign forces opened fire on a passenger bus in southern Afghanistan on Monday, killing four civilians and wounding 18 others, a provincial official said. (REUTERS/Ahmad Nadeem)

Kandahar, Afghanistan – In the early morning hours of April 12, U.S. troops fired on a bus in Kandahar, Afghanistan, killing five civilians and wounding 18 more. The driver of the bus, Esmate, said, “They opened fire at us and I fell unconscious. The people who were killed were sitting in the seats just behind me.”

Another witness, Gul Mohammad, stated that the U.S. troops “opened fire for no reason.” A woman and a child were among those killed, according to local authorities.

END_OF_DOCUMENT_TOKEN_TO_BE_REPLACED

An investigation into the killings of five Afghan civilians by U.S. forces on Feb. 12 has revealed that the U.S. tried to cover up its responsibility for the deaths.

On the night of Feb. 12, U.S. occupation forces entered a home in the Gardez district of Paktia province, east of the capital Kabul. The U.S. soldiers shot dead two Afghan men who were carrying weapons, then shot three pregnant women. The Afghans had been celebrating the birth of a baby. The U.S. initially claimed that the two men were Taliban fighters and that the three women were already dead when they arrived on the scene. In fact, the two men were a local police chief and a prosecutor.

END_OF_DOCUMENT_TOKEN_TO_BE_REPLACED

FRSO: No to the Escalation, End the Afghanistan War Now! 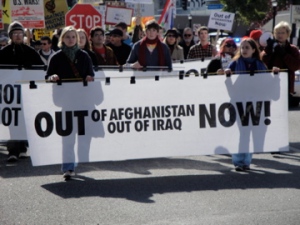 March to demand “U.S. out of Afghanistan and Iraq now!” (Fight Back! News/Staff)

The following statement is from the Freedom Road Socialist Organization, and is being reposted here from Fight Back! News:

No to the Escalation, End the Afghanistan War Now!

Freedom Road Socialist Organization denounces the escalation of the bloody and unjust U.S. war in Afghanistan. We condemn the decision made by the White House and Pentagon to ‘surge’ over 30,000 U.S. and NATO forces into Afghanistan in an attempt to stabilize a failing occupation regime.

END_OF_DOCUMENT_TOKEN_TO_BE_REPLACED

Afghanistan: the days of colonial occupation are numbered 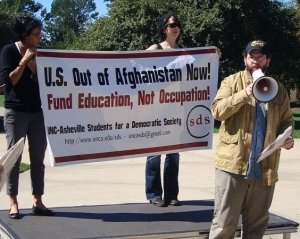 The following is from the Communist Party of Great Britain (Marxist-Leninist):

Afghanistan: the days of colonial occupation are numbered
Inter-imperialist contradictions are being forced into the open by heroic forces of patriotic resistance.

No sooner had the polls closed in Afghanistan on 20 August than the leading representatives of the occupation regime declared this electoral farce a success. Nato’s Secretary-General, Anders Fogh Rasmussen, praised the Afghan people’s determination to build democracy, while the leaders of the US, Britain, Germany and France – the main participants in the imperialist predatory war against the Afghan people – rushed to pat themselves on the back for facilitating this alleged exercise in democracy.

END_OF_DOCUMENT_TOKEN_TO_BE_REPLACED

Afghan ‘Election’: No solution to the problem of occupation

The following is from the British anti-imperialist journal, Lalkar:

The charade that passed for a presidential and provincial election in Afghanistan was staged on Thursday 20th August 2009. According to the information released by the occupation forces and the puppet Karzai regime, 40 candidates contested for the presidency, whilst 3,180 stood in the election for provincial councils. According to the same sources, of the 17 million Afghans eligible to vote, 5 million allegedly did so, that is, just under 30 per cent of the electorate entitled to vote. The resistance for its part has claimed that the actual turnout was less than 10 per cent. This not withstanding the deals that the Karzai authorities had done with some local sections of the resistance for a ceasefire on the polling day.